The WEA course, Four Short Books and a Poem ran online over the summer term, 2021. The four books in question were:
Laurie Lee, Cider with Rosie
Mark Haddon and Virginia Woolf, Two Short Stories
Carys Davies, West
Kent Haruf, Our Souls at Night
The poem was Joy Harjo's She Had Some Horses.
Close reading was an essential part of the course as was the written responses of the students, and underpinning the whole thing was an investigation of the notion of creative non-fiction. Below, in shortened form are the responses of the students to West by Carys Davies. 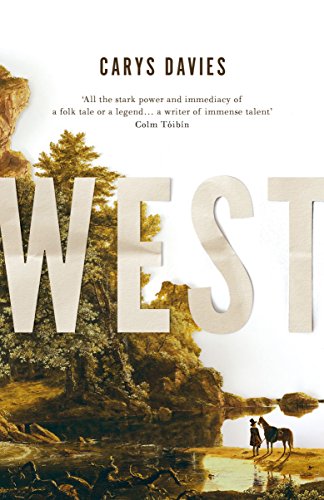 Cy Bellman, 1815 Pennsylvania, stores his provisions in leather saddlebags; guns, dried meat and fish, beads and trinkets, charcoal, pen, and ink to document the experiences of his odyssey. He seeks the remains of the great fossil animals found by the Presidents Expedition of 1804.  Bess, his daughter, he leaves back home in the harsh care of Aunt Julie. Bess waits and prays for his return.

Carys Davies’s paints a lyrical picture of the beauty of the great Missouri River, the Allegheny Mountains, the wildlife, the heat of summer and the deep cold of winter, her prose is lean. Characters are richly drawn, deeply human.  Much is said in few words.  The plot undulates and meanders like rivers and hills and reaches its perilous bloody climax with arrow sharp precision.

The central theme is the colonisation of America by white settlers and their belief that everything is theirs to own, played out by the people of Lewistown, by Bellman and the traders he meets. Themes of loss and abandonment, of love and lust and the limits of loyalty in friendship run parallel.

A Shawnee boy, Old Woman from a Distance, finds Bellman inexplicable and alien, akin to the huge animals from his people’s myths that were destroyed by the Great Spirit.  He trades his knowledge and expertise for baubles.  But this is not stupidity on his part, he has no need for the white man’s things. all except the guns which he has learned are far superior to his own weapons, his axes, his bows, his arrows.  He desires decoration, beauty, art.  He achieves heroic status in the dramatic and bloody conclusion.

Bellman’s focus is the future, the unknown, science, freedom, knowledge, and discovery. He rejects the past, the known, his responsibilities, the narrow lives of his neighbours, and dull routine.  His pilgrimage laid out in the letters he writes on his progress are life lessons for his daughter and where elsewhere he might fail, here he succeeds.  How this is achieved is the great and joyous outcome of the book.  Read it.  It’s great.


Creativity is not easy when faced with height restrictions. A helter-skelter poised, my ideas teetering on the edge. Skittering down at full speed. Stopping, exhilarated and  for a long time breathless. In deep respect for Carys Davies and her short story, West I tip my stovepipe hat. Yet snigger in  disillusionment, thinking this could be good enough.

Bess, all of ten years, reads as astute in spite of her lack of experience. She seems to acknowledge the grittiness of life yet has imagination and an unchallenged naivety that sees no wrong in her father's action.
“How far must you go?”
“That depends.”
“On where they are?”
“Yes.”
“So how far?”
His answer of “More than a thousand miles,” an implication of how grave and perhaps foolhardy his journey is to be. John Cyrus Bellman, Cy to the few he would care to call friend, is about to say goodbye to his daughter. Two guns, a hatchet and knife, all that's to protect him as he moves further and further away from her and his old life.
Left in the care of her Aunt Julie, Bess has no choice but to keep vigil for her father's safe return.  Unperturbed by rumours of her father's insanity, she sees his hunt for the giant creatures as a noble thing. The reality of their existence found in a few ancient bones. More characters appear in the unfolding tale, namely Elmer Jackson. The unease at the onset of his appearance is skilfully relayed by the author. As too, the Shawnee Indian boy, Old Woman From A Distance who plays a major role in his relationship as Bellman's guide.
There's an inevitable conclusion, Bess is in danger. But who's there to rescue her?


A Review of West by Carys Davies

This short debut novel by Welsh writer Carys Davies tells in just 150 gripping pages the story of one man’s dream and his journey west.
It is a tale of exploration, exploitation and self-exploration set in 1815 Frontier America. The book begins in Lewistown, Pennsylvania and follows Bellman as he journeys west to St Louis and crosses the Mississippi.
Cy Bellman, an American settler and widower, after reading that huge ancient animal bones have been discovered in the swamps of Kentucky, decides to leave his farm and 10-year-old daughter, Bess, and go in search of these monsters. Bellman’s dangerous travels, with the aid of a Shawnee Indian guide, take him as far as the Mississippi. Back home on the farm his young daughter, looked after by a forbidding Aunt Julie, struggles without him but is keen to follow her father’s journey through books from the library, even though his absence puts her in danger from two predatory men.
As Bellman goes west, so do the Native American tribes as settlers take their lands. The white man’s pioneering spirit goes hand in hand with plunder.
The story moves between the two main characters, Bellman and his daughter, but also focuses on secondary characters allowing the development of issues such as the mistreatment of Native Americans, the infallibility of adults and the vulnerability of a young individual.
The novel builds on the sense of dread created at the beginning and reaches a terrifying climax, as the various elements are skillfully and concisely drawn together.
West is beautifully written and may even stand comparison with such classics of the American west as Steinbeck’s The Grapes of Wrath and The Red Pony. It is an accomplished and enthralling first novel.

Since there were books there have been reviews.  If you consider this from the author’s perspective it is a bit of a needle match.  Above all, most people who call themselves ‘writers’ would like a matching set of ‘readers’.  It is rarely a secretive process. Consider the ten-year-old with a pink diary that has a little baby brass lock on it.  When you think about it the writer, even at that tender age, considers carefully whether the words that are written will be read by another.  If so, then perhaps they are coded messages similar too ‘I do wish mum would let me go to the disco with Mark who I love with all my heart and will adore for ever, ever, ever.’ But then there is the covert writer who does not wish to be read and uses the medium for the exploration of the private self.

So, when you go into a bookshop the first thing that is assumed is that you will pay money for a book.  You have the power, so you think.  Consider your behaviour.  You look at the cover to consider whether it is ‘you’ and then you turn it over to look at the biog.  So far, so good. Then you assess its weight – are you in a War and Peace mood where you are in for a long period of intense concentration, or perhaps a sitting in the sun half asleep read.  Won lots of prizes.  Therefore worthy. THEN, you turn to the reviews, which are on the front, cover – both sides- and the first flimsy page.   The book seller is ambivalent at this stage.  The commitment is nearly there so leave well alone. Let’s assume that West has reached this stage of your contemplation – even though it is rather light and will not fill much time.


Wow – you think.  You read some reviews having chosen which of the pundits who have been bought into play that you will engage with. I chose the Sunday Times because I usually manage to read those.  They advise that it is the best thing since sliced bread.  Thank you, Andrew Holgate.  It’s a deal. The bookseller looks relieved.

Who am I to disagree with all the reviews – do you think they were paid to write them too? A few quid for pleasant words.

So, I read it because the whole machinery of book publication says I should.  Then I find I agree with every word and fall at her feet.  Thank you Carys Davies.

Review of ‘West’ by Carys Davies

They say don’t believe what you read in the papers.  When Cy Bellman’s curiosity is piqued reading about ancient bones he plans to search for his holy grail.  Dressed, polished, and equipped like a steam engine eager for discovery. As if a bet has been wagered - like Phileas Fogg – the desire to find these beasts sees him leaving behind a daughter in her formative years.
His journey is accompanied by a Shawnee teenager ‘Old Woman from a Distance’ a name he will put up with until he gets another.  They build trust in each other, to a point, despite the history of the two sides they represent.  There are language barriers - linguistically and ideologically.  The old conflict we have watched many times on Hollywood screens and emulated by children playing dress up as cowboys and Indians. The language wall is kept in place which feels like the settler playing God in the tower of Babel.
We see first generation habitants engage with explorers and trade, but one that is exploitative.  An elder prophesies “that a time would come when they would know that the whole of the earth had been pulled from beneath the skin of their feet.”  And despite the teenager’s personal tragedy of his people being dispersed to the West for ‘progress.’
The boy’s revenge is displayed using tools of the traders that evokes a history of early biological warfare through poisoned blankets.  And yet, he honours his duties and brings a sense of justice on behalf of the reader.  The suggestion is offspring of the European might have to work with the Native in building trust to develop for all of humanity.
Extinction and loss of a way of life at the expense of civilisation and our environment which the children of those wanting to advance the frontier - a mode of exploitation spanning continents further than the Americas.
The Cree proverb sat cross-legged in the back of my mind reading this novel:
Only when the last tree has died, and the last river has been poisoned and the last fish has been caught will we realize that we can't eat money.